My name is Terry Easter. I am fifty-three years of age and I work for Thames Reach as a support worker. Thames Reach is a homeless charity which has projects over the south of England including hostels, supported housing, an employment academy and it also offers a floating support service to continue to support service users when they have moved into independent accommodation.

Four years ago I was living in supported housing which was run by Southwark council after years of living rough on the streets of London and various short stay hostels. I found myself in this position after a long period of alcohol abuse. I left school at the age of fifteen without any qualifications; finding work was a lot easier than it is today when I left school.

When I was in supported housing I was introduced to Maggie Sandy who is a Resettlement Officer at Southwark council and I began working with alcohol misuse workers and went into residential detox. When I returned from detox I needed to do something meaningful to help me stay sober and try to move on with my life.

I applied to take a peer mentor course with New Direction which is an alcohol and substance misuse service. After being clean for six months, I was accepted to take the course which ran for three months and I attended four days a week. Not only did this keep me occupied, it gave me the confidence to engage more and helped with my future learning as there was a lot of written work to be completed. If I am honest, I was surprised to pass the course and I was allocated a voluntary placement with New Direction which I enjoyed and, looking back, it provided me with the confidence and experience to move forward with my continued learning.

Maggie Sandy told me about Thames Reach as she was previously employed by them and gave me the details of the apprenticeship scheme they run. She encouraged me to apply and helped me with the application and provided me with a reference.

I had my doubts about applying especially when I learnt I would have to attend college once a week for a year and gain a qualification. I had not been in a classroom since I was fourteen, other than the peer mentor course which was pretty laid back and did not involve using a computer, which I was very apprehensive about as I had never been near a computer in my life.

Again I was surprised when I was interviewed for the apprenticeship scheme and was successful but I still had apprehensions about attending college as I thought at my age it was much too late. But with much encouragement from Maggie Sandy and the tutor at City Lit College, Lucy Robson, I decided to give it my best and see what happened but I have to admit I was not very hopeful of being successful in gaining the qualification needed to obtain employment. I had plenty of life experience but the thought of being in a classroom and using a computer was daunting.

I can not praise Lucy Robson enough. She showed great patience with me and when I became frustrated as I thought I was not coping she assured me I was doing ok and took time to discuss any problems I was having. I started to meet with some of the other students of a weekend and we went over the assignments we were set. They also helped me with learning around the computer and I found I was really enjoying learning and using a computer which was something I honestly thought I would never say.

I managed to pass and gain my qualifications in health and social care as well as English and maths which I would never have thought possible. Going to college and learning was one of the best decisions I ever made and it was enjoyable and has given me the confidence and attitude to try anything. I now know that age is no barrier to learning. I also feel my voluntary work with new direction was a great starting point and would recommend voluntary work for anyone thinking of a change as it is a great way of gaining experience. 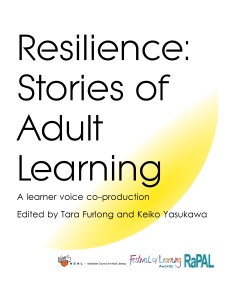